People who know me know that I have a thing for airplanes. What is less well-known is that I occasionally develop an interest in trains as well. Recently though, that interest has focused itself onto one train:

The Mark V train is, quite simply, the best looking train in the world. It's sleek "LearJet" lines beat out those of the similar, but boxier and uglier Mark VI used at Walt Disney World. The Bombardier M-VI, a commercial derivative of the Mark VI used in Las Vegas, is uglier yet. Maybe it's just because I grew up at Disneyland, but to me a Mark V is what a monorail should look like.

The problem though, is that the Mark V isn't actually a full-size train. It is smaller than what you'd normally do, to help it fit in with Disneyland. So you'd have to make it taller (like the M-VI) and you'd lose the proportions. To compensate, you'd have to make the train wider as well, but since I'm not a Transportation Engineer, I can't say if that would introduce more problems.

That said, it's time to get your last rides on the Mark V, which has been in operation since 1987. It's currently running one way trips between Tomorrowland and Downtown Disney during construction of the new Finding Nemo Submarine Voyage. Later this year, it will close completely and in 2007, will reopen along with Nemo. At that time, new Mark VII trains are slated to appear.

Swiped from a MouseTimes Message Board thread, here's the concept drawing of what the Mark VII should look like: 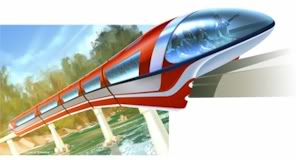 I'll reserve judgment on it until I see the real thing, but in any case I'm sure I'll miss the Mark V.

Just don't get me started on Disney's using Disneyland's 50th Anniversary to advertise Walt Disney World. You'd think that at least in California, they'd advertise our park, the original, but no....
Posted by David at 8:25 PM

Email ThisBlogThis!Share to TwitterShare to FacebookShare to Pinterest
Labels: monorail