Spirit Airlines likes to charge low fares. Really low fares. Absurdly low fares. So low, that they don't cover the cost of hauling the passenger from the gate to the end of the runway. How low? Try $9. But that's apparently not low enough. Yesterday, they announced new, even lower fares. But where do you go from $9? 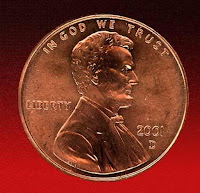 Of course, if you think you're really going to get to fly somewhere on an airplane for one measly penny, you'd be quite mistaken. For if there's one thing Sprit likes more than really low fares, this is it:

Here are a few of them:
But all of that isn't new. And much of it is being copied by other airlines, some not exactly known for having low fares in the first place. That one-penny fare also doesn't include fuel. You pay for the seat, but there's an extra fee to actually move it anywhere.

But, buried in that press release about the one-penny fare (which I'm sure Spirit was hoping would get most of the attention), was yet another new fee.
That's right. For the privilege of hauling your bag through the security checkpoint by yourself (ensuring that all liquids are in 100mL containers or less in a 1-quart zip top plastic bag outside your luggage), dragging it all through the airport terminals and down the jet bridge, and hoisting it in to the overhead bin all by yourself (ok, so you might get another passenger or a flight attendant to help you with that last bit), you have to pay Spirit Airlines a fee.

I want people to pay me to do things themselves. Imagine having to tip the bellman at a hotel for not bringing your luggage to your room, or tipping the valet to park your car yourself. That's what this is.

At the same time, they're lowering the fee for the first checked bag. $15 on domestic flights and $20 on international flights; $10 more if you're not a $9 Fare Club member. So it's actually cheaper to check a bag then not. The airline is charging you more if you do something yourself than if they do it for you.

Does that make any sense? It's like if, at the gas station, the prices at the full service pumps cost less than at the self service pumps.

Actually, yes it does make sense. Spirit's COO lays it out in the press release:

“In addition to lowering fares even further, this will reduce the number of carry-on bags, which will improve inflight safety and efficiency by speeding up the boarding and deplaning process, all of which ultimately improve the overall customer experience,” says Spirit’s Chief Operating Officer Ken McKenzie. “Bring less; pay less. It’s simple.”

So, they want to reduce the number of carry-on bags. So if you charge people to do it, they won't. Simple enough.

Or is it? We have to ask the question: Why are people bringing on so many carry-on bags?

I've already answered that question. Scroll back up. I'll wait.

Ok, I'll tell you again:
As I predicted when American Airlines started charging for that first checked bag almost two years ago, when asked to pay a fee to check their bags, many customers will choose instead to carry them on. How do we know this is happening? Ask the flight attendants, who will tell you that passengers have been carrying on more since the airlines started charging to check bags.

So, doesn't that mean that the problem of too-many carry-ons is really the airlines' fault in the first place?

And does it also mean that they could solve the problem by simply not charging that fee?

But instead of reversing the move that caused the problem in the first place, Sprit has decided to solve the problem by charging yet another fee. It may work too, but not in the way Spirit is hoping.

Fewer passengers on board mean fewer carry ons, regardless of whether or not they check the bags.

So why would the company choose the customer-unfriendly option in the first place, that has the possibility of hurting its business even more?

I can draw only one conclusion:

Spirit Airlines hates its customers.
Posted by David at 10:33 PM

I will NEVER fly Spirit Air again - Do employees have to pay for carry on? The pilots and flight attendants should

It is good if the Spirit Airline want to get their fare very low cost because they want to have a lots of customer and they realy want that their passengers don't cover the cost of hauling from the gate to the end of the runway.